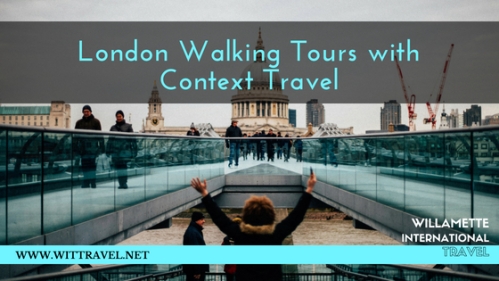 The Royal Wedding is over but that doesn’t mean you can’t still enjoy London in all its glory.

One of our favorite walking tour experts, Context Travel, offers several awesome historical and foodie tours around the British capital.

One of the key reasons we enjoy Context Travel is that their tours are all led by qualified docents, Ph.D.-level scholars of history, art and archaeology. Forget the boring introductions–discover in-depth perspectives that go beyond the guidebook.

Here are just some of the tours to check out this summer:

The world’s attention descended upon London this past weekend as Prince Harry and Meghan Markle tied the knot. It was a wedding that defied many royal traditions, from Markle’s country of origin, to its location at Windsor Castle, to the dearth of fruitcake at the reception (Gasp!).

How did these rules become so codified, and what is the significance of their recent breaking? Get an “intellectually curious” take on royal tradition—be it marriage on Context Travel’s Westminster Abbey Tour, murder on their Tower of London Tour, or a full overview on their Full Day Royal Tour (8 hours of monarchy glory).

Though often overlooked by visitors, some have argued that Britain’s heart and soul resides in the stately Tate Britain Museum. Dive right in with Context Travel’s art historian and explore J.M.W. Turner’s sublime seascapes and Francis Bacon’s contortions.

Read: Why a visit to this cultural treasure is a must for any visitor.

This July, London welcomes the return of Wimbledon, but year-round there’s another royally curious sport upstream the River Thames. The week following the tournament, the Real Tennis Champions Trophy returns to Hampton Court Palace, in which world-famous players descend to play an ancient game of, shall we say, “real tennis.” Real tennis, is not your grandma’s racket sport. “Real tennis,” enjoyed by the likes of Charles II, William III, and even Prince Albert, differs significantly from its modern counterpart, and can only be played on one of 50 courts remaining in the world.

What better place to celebrate the Bard than the city where his plays excelled? Behind the modern sprawl of London lies the secret history of the theatre. During this London Theater Tour,you’ll reconstruct London’s historic stages, and come to understand the social and artistic forces that were born here and that still underpin entertainment in the western world. You’ll explore in-depth the influence of one William Shakespeare, whose works, staged in London, continue to resonate throughout the world today.

Pubs and beer are symbols of the best of Britain, where you can gorge yoruself on fish, chips, and brews. This 3-hour London Beer and Brewery Tour is all about ample tastings at various pubs and breweries located in the South Bank London area. Led by a trained food anthropologist specializing in beer and brewing, you’ll focus on the history of brewing in London, highlighting beer’s evolution from a dietary staple, to the almost lost tradition of cask ales, to today’s renaissance of craft beer and brewing.

For more awesome London tours or an awesome travel agent to book your trip to Britain this year, give us a call at 503-224-0180 or email inquiry@wittravel.com. Cheers!