We continue with WIT Agent Wailana’s report on Iceland. Today: the Golden Circle.

The Golden Circle is a ring of attractions outside of Reykjavik, easy driving distance as a day trip or for your first day. Three sights you must absolutely not miss are Thingvellir, Geysir and Gullfoss. Also of note are the Kerið volcano crater, Hveragerði greenhouse village, Skálholt church, and the Nesjavellir geothermal power plant.

Thingvellir is a beautiful valley where medieval Icelanders used to hold council and create laws. Both a national park and a UNESCO World Heritage Site, it’s played a key role in the formation and conservation of Icelandic democracy since 930 c.e. Dramatically poised between the North American and European tectonic plates, the site is cradled by a cool marshland and the largest lake in the land, Thingvallavatn.

Geysir is your next stop on the Golden Circle. Or rather, the Haukadalur valley, which holds both the eponymous Geysir, and Strokkur, two beautiful geysers right next to each other. In the vicinity are also several blue pools, mud pots, fumaroles, smaller geysers, and a continuously bubbling Litli-Geysir. The eruptions have been known to hurl boiling water up to 70 meters in the air. Geysir itself is a bit unpredictable, but Strokkur regularly erupts every 2-5 minutes. The trick is to get a snapshot before it collapses! 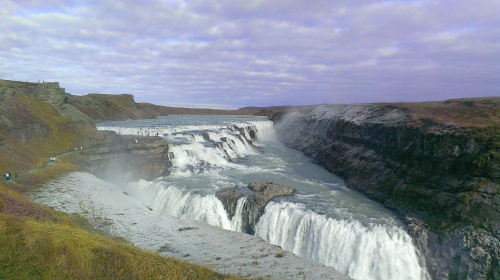 Gullfoss is a worthy final stop on the Golden Circle. This massive waterfall flows from nearby glaciers, and drops in two tiers before spilling down into the Hvítá river canyon. Perhaps the most famous story associated with the falls in that of Sigríður Tómasdóttir, who was determined to preserve Gullfoss from destruction. During the early 20th century, the state began drawing up plans to dam up Gullfoss to generate hydroelectric energy. Sigríður walked barefoot to the parliament about 120 km away and fought the action tooth and nail. She even threatened to throw herself into the waterfall, and to this day there is a plaque in the canyon that commemorates her conservationist efforts.

A note on Icelandic pronunciation: You will have a tricky time with the pronunciation at first, but by the end of your trip you’ll sure to have some of it down! Try your hand at the name of that famous volcano, Eyjafjallajökull, now notorious for grounding planes across Europe during its eruption in 2010.

It’s tricky for a non-native speaker, but to English-speakers it sounds vaguely like this: ey-jah fee-aht la yuh kutl. (IPA: [ˈeːɪjaˌfjatl̥aˌjœːkʏtl̥]) Double ‘ll’s are pronounced ‘tl’, and the ö is like the Norwegian ø or the German ö. Now just say it 3x fast!!

Want to check out the Golden Circle but only in Iceland for 1-3 days? Book a tour on one of these spectacular day trips.

Tune in next Monday for some more waterfalls and the southernmost point of Iceland!

Thinking about a trip to Iceland next summer 2014? Call 503-224-0180 or email info@wittravel.com to chat with one our agents! Wailana would love to share with you more insider tips about traveling to Iceland!

Filed under Europe, Iceland, Where in the World is the WIT Agent?

Taking advantage of free stopovers in Reykjavik with Icelandair? Don’t know what to do with your extra time? Here are some suggestions for a few days in the capital city.

This classic day trip takes you out to the most accessible sights in Iceland. Stop at Geysir and Strokkur hot springs, then check out the powerful Gulfoss waterfall. Visit Thingvellir, the site of the oldest functioning parliament in the world. Your visit will also include a visit to the Nesjavellir power plant (weather permitting) and the charming village of Hveragerði.

Don’t miss the exceptional opportunity to view and photography the Northern Lights! Only available from September to April, this tour will take you on a mysterious night trip far away from the city’s lights.

Only have a day’s window in Reykjavik? Head to the Blue Lagoon, one of the most valuable tourist destinations in Iceland. The Blue Lagoon lies between Keflavik airport and Reykjavik, allowing easy access for folks on layover. Bathe in warm waters or enjoy a spa mud treatment surrounded by lava fields and snow-capped mountains.

Embark an adventure with an expert guide to hike and ice climb on this magnificent glacier! Explore the rugged terrain with provided ice axes and crampons—beginners welcome! View some spectacular ice formations on the glacier tongue, from crevasses, sink holes, and jagged ridges. Once you’ve had your glacier adventure, stop and admire Skogafoss, one of Iceland’s largest waterfalls.

Take a full day tour to South Reykjavik and the stunningly gorgeous Jokulsarlon glacial lagoon. Enjoy a scenic drive past picturesque villages, through the vast desert of Skeidarasandur, and pass Iceland’s biggest volcano, Oraefajokull. At the lagoon, you’ll enjoy a boat ride through the ice lagoon. This tour is seasonal, operating from 1 May to 31 October.

WIT Agent Wailana will be heading to Iceland next week. Stay tuned to her first hand account! Summer airfares are now open on the nonstop Seattle to Reykjavik! For more information booking a holiday in Iceland, call 503-224-0180 or email info@witravel.com. Did you know that you can book free multi-day stopovers in Reykjavik? Yes! Call us to find out how!