Travel News: Will Hawaii get its Inter-island Ferry back? 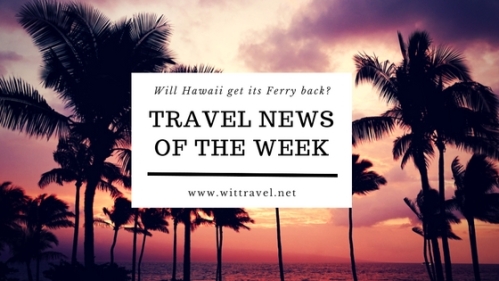 Alaska Airlines To Keep Current Loyalty Program
In a year full of bad news for frequent flyers (see Delta/Alaska fallout), Alaska appears to be stepping up, bucking the trend, and doubling down on Mileage Plan, its loyalty program. It’s the only remaining airline loyalty program that doesn’t have a revenue component attached to it.

Will Hawaii Gets Its Interisland Ferry Back?
The Hawaii State Department of Transportation received a US$500,000 grant from the federal Maritime Administration to hire consultants to explore potential routes and boats for an inter-island ferry. But would it work this time? By all accounts, environmentalists were the reason the Hawaii Super Ferry was shut down, but some speculated the airlines were also behind the demise of this alternate mode of inter-island travel. Right now, roundtrip airfare between most islands is around $US300, although there are a few lesser-costing modes of travel on small turbo-prop planes. To put this into perspective, for US$600 roundtrip, one could fly from the US East Coast to Europe (around 3,500 miles from New York to the UK), while the furthest distance in the major Hawaiian Islands is from Kauai to the Big Island – a distance of only 305 miles. The Hawaii Superferry launched in December 2007 and was forced to shut down in March 2009. It subsequently had to file for Chapter 11 bankruptcy with debts that included $135.8 million owed to MARAD which had provided construction financing guarantees.

Atlantis Resorts Coming to O’ahu
The extravagant Atlantis Resorts announced plans to develop a resort project in Ko Olina on O’ahu. It’s expected to be built near Disney’s Aulani Resort, and will mimic Atlantis the Palm in Dubai. There will likely be numerous restaurants, nightclub, spas, aquarium, waterpark, and waterfront hotel rooms—but for now, all of that is speculation. Ko Olina developer Jeff Stone said that it will be designed as an “international destination for millennial travelers,” so it is unknown how much the resort will reflect the local ecosystem and culture.

Uber Is Losing Lots Of Money
Uber generated $3.76 billion in net revenue the first 3 quarters of 2016, but it is estimated that the bottom line will be a loss of more than $2.2 billion, with $800 million of that in the third quarter. By year end, it is expected that Uber will have netted US$5.5 billion. The company has tried to keep its financial information from public consumption, however, an anonymous source has revealed this data, which also shows that the San Francisco-based company is valued at a whopping $69 billion. That’s more than Twitter and General Motors combined.

Sandals Opening Fourth Resort In St Lucia
Sandals Resorts International has announced its plan to add a fourth resort to its award-winning list of properties on the Eastern Caribbean island. The Sandals brand has enjoyed tremendous success in St Lucia since 1993 when it made its first foray there and the newest resort, to be named Sandals LaSource St Lucia, will by all indications be a game changer. Groundbreaking for the new resort which will be nestled on 19 acres of land next to the existing Sandals Grande St Lucian Resort is set to begin in spring 2017. With the addition of this new resort, guests in St Lucia will now have the option of ‘Staying-at-One, Playing-at-Four’. Sandals LaSource St Lucia will boast an exotic infinity-edge sky pool bar offering picturesque views of the island’s beautiful north coast, 350 rooms and suites inclusive of the exotic SkyPool Butler Suites and all-butler signature swim-up Rondoval Suites, a first in the chain. The new resort will also feature an electrifying entertainment package to include a main stage with a 20′ high LED screen and a mobile DJ party scene.

Lie-Detecting Robot Is The Customs Officer Of The Future
Travelers in the US and Canada may soon be forced to undergo a lie detector test as a standard part of airport security. The Automated Virtual Agent for Truth Assessments in Real Time (AVATAR) is currently being tested by the Canadian Border Services Agency and the US Department of Homeland Security. The robot, programmed to look for physiological changes that indicate lying through eye-detection software and other sensors, could help border agents catch terrorists or drug traffickers, according to San Diego State University researchers. “AVATAR is a kiosk, much like an airport check-in or grocery store self-checkout kiosk,” San Diego State University management information systems professor Aaron Elkins told SDSU’s News Center. The kiosk has a face on the screen that asks questions of travelers and can detect changes in physiology and behavior during the interview. The system can detect changes in the eyes, voice, gestures and posture to determine potential risk. It can even tell when you’re curling your toes. Passengers would be made to step up to the kiosk, then answer a series of questions such as, “Do you have fruits or vegetables in your luggage?” or “Are you carrying any weapons with you?” If lying is detected, a passenger is taken aside for further screening. Passengers are also asked a series of simple questions to measure whether they are simply anxious about flying. Elkins believes the kiosk, which he says is bilingual and polite, could be used not just for border security, but also for law enforcement and even job interviews. “AVATAR has been tested in labs, in airports and at border crossing stations,” Elkins explained. “The system is fully ready for implementation to help stem the flow of contraband, thwart fleeing criminals, and detect potential terrorists and many other applications in the effort to secure international borders.”

Port Everglades Gets Green Light To Deepen Channels
Port Everglades has received federal authorization for the US Army Corps of Engineers to move forward with a plan to deepen and widen navigation channels. The approval came as part of the Water Infrastructure Improvements for the Nation Act, signed into law Dec. 16 by the President. The project, currently in the preconstruction engineering and design phase, can now proceed through the permitting and federal funding processes. It is anticipated to create an estimated 2,200 construction jobs and nearly 1,500 permanent direct jobs locally resulting from additional cargo capacity. Port Everglades received authorization for more than $335 million in the Water Infrastructure Improvements for the Nation Act earlier this month. The new legislation allows the port to take advantage of the expansion of the Panama Canal and receive the larger, neo-Panamax cargo ships. The project addresses safe shipping requirements as older cargo fleets are replaced with much larger ships that require wider channels and deeper water. Larger cargo ships currently arrive from Europe and South America lightly loaded and can experience difficulty maneuvering safely when other ships are berthed in some of the port’s narrower channel areas. Key features are to deepen the main navigational channels from 42 feet to 48 feet (plus one-foot required and another one-foot allowable overdepth for a total of 50 feet), and to deepen and widen the entrance channel and parts of the Intracoastal Waterway so that cargo ships can pass safely by docked cruise ships. 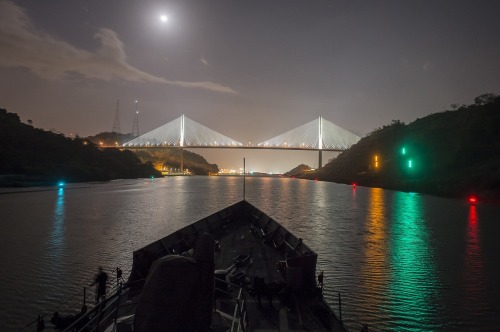 Korean Air Crew To Be Allowed To Use Stun Guns On Passengers
Korean Air Lines has said it will allow crew members to “readily use stun guns” to manage in-flight disturbances, after being criticised by US singer Richard Marx for its handling of an incident involving a violent passenger. The South Korean carrier also said on Tuesday it will beef up security training of crew members. Last week, Marx said on Facebook and Twitter he helped initially subdue “a psycho passenger attacking crew members and other passengers”. He also accused crew members of being “ill-trained” and “ill-equipped” to handle the “chaotic and dangerous event”. Korean Air Lines said on Tuesday its crew members were “hesitant” to use taser guns because they were permitted for use in only “grave” situations which jeopardise the life of a passenger or crew member or the safety of a flight.

Gatwick Prepares For Major Terminal Shake-Up
Gatwick Airport is advising passengers to check the terminal of their airline as three of its major airlines prepare to switch in January. British Airways will move to the South Terminal, Virgin Atlantic will move to the North Terminal, and easyJet, which currently operates out of both terminals, will consolidate its entire operation in the North Terminal. The move will be the airport’s biggest project to date and took two years to plan. The relocation will be staggered over three days with all three airlines operating a reduced flying programme designed to simplify the upheaval. Around 50,000 passengers will be travelling with the three airlines on the 277 flights that will be relocating across the 72 hours. From 24 January all easyJet flights will depart from the North Terminal, while from 25 January British Airways flights will depart from the South Terminal and Virgin Atlantic flights will depart from the North Terminal. Gatwick said the changes will improve passenger experience with state-of-the-art technology at check-in, security and immigration as well as new bag-drop zones. It will also bring new British Airways and Virgin Atlantic lounges. Gatwick’s COO said “We are ready to deliver this major step in Gatwick’s strategic transformation programme. The moves have been meticulously planned for more than two years, with close attention given to ensuring that the airport operation and the experience of our passengers is not affected during the transition. Relocating the airlines allows greater efficiency and positions all three carriers for growth, which in turn drives Gatwick’s growth. For our passengers, investment at every step of their journey through the terminal will be hugely beneficial.”